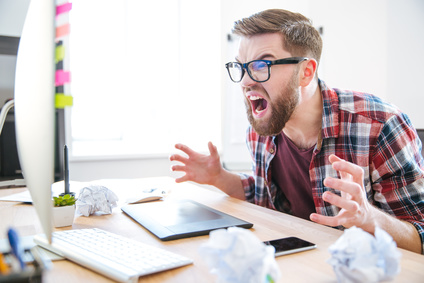 Every trader knows this scenario: you found a great setup and entered a trade, then price goes against you and you buy more because you believe that price will still go up. And as price goes down further, you keep buying until you are left with a huge loss and have to close your position because it hurts too much. Been there, done that.

But why does it feel so good to add to a loser and why can’t we as traders just not stop doing it?

Cognitive dissonance 101 – Your brain is not made for trading

Cognitive dissonance means that we are experiencing conflicting and discomforting experiences, thoughts and emotions that arise from our own actions. A popular example are smokers who are faced with the dangers of getting cancer – it’s easy to see why smokers don’t like to think of cancer 20 times per day each time they light a cigarette. When people experience such negative emotions, they start to change their behavior and/or their thoughts to reduce the discomfort. But instead of quitting smoking, smokers will justify their bad behavior, talk down the risks or come up with other avoiding mechanisms to make them feel better. You can probably already see how this will apply to trading problems…

There are two types of cognitive dissonance biases:

1) Selective perception: people only notice information that appears to affirm a chosen course.

Suddenly people only read confirming articles or talk to people who share their ideas in order reduce the dissonance.

In trading, people only look for articles or use indicators that justify staying in a losing trade. Or, when you are in a losing long trade, you give too much weight to every uptick and you neglect the fact that price keeps going down and down.

“Everyone does that, so why not me?” is a term often used to justify bad behavior. This rationalizing starts as early as kindergarten, we do it throughout school, university, it’s common in workplaces and also in our family lives…

In trading, people try to come up with excuses why adding to a loser is good or why they should break their entry rules this time (again).

Cognitive dissonance drives almost all our behavior and daily actions, usually without us knowing it. Without cognitive dissonance we would feel terrible and worried all the time because we’d have to face the cold hard truths and effects that our own decisions are bringing us. In order to avoid those unpleasant emotions, people go to great lengths to avoid admitting the inconvenient truth:

“Every time you are tempted to react in the same old way, ask if you want to be a prisoner of the past or a pioneer of the future.” –Deepak Chopra

Cognitive dissonance has many forms in trading and it influences all layers of our decision making as traders:

And even when it comes to the price action you see on your charts, cognitive dissonance is often the driving force behind fake breakouts, fakeouts and unreasonably volatile market tops where amateurs are tricked into taking more losing trades and are then forced out of their huge losses.

False breakouts are the manifestation of cognitively dissonant traders.

There is no ‘easy trick’ that will suddenly turn off the problems that come with cognitive dissonance – we have developed this mechanism over thousands of years – but there are a few very specific things and ways of thinking that a trader needs to adopt in order to make better trading decisions:

Our mind really deserves to be called the great trickster. Controlling it requires us to first become aware of it and of the ways in which it manipulates us in our behavior, especially when it comes to trading. Understanding the concept of cognitive dissonance is a critical step in reaching a truly objective assessment of one’s self-performance and abilities.

“We’re blind to our blindness. We have very little idea of how little we know. We’re not designed to.”