Entries Don’t Matter, What To Do With Missed Trades And Some More… 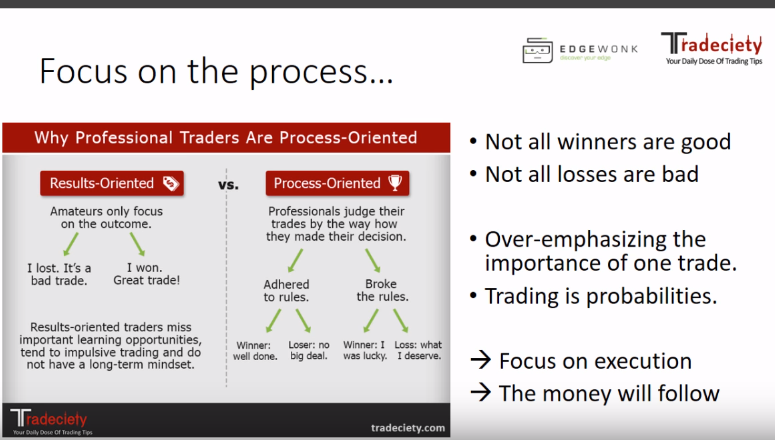 There are so many trading topics and concepts I’d love to talk about, but often they don’t make for a good or long enough article. So in this article, I want to explore multiple important trading topics that haven’t been covered here before.

So many traders worry about missed entries and potentially profitable trades that they did not participate in. However, you have to be clear why it is that you missed a trade and what this then means for your trading.

There are 3 types of missed trades:

Those types of missed trades have to be avoided and it means that you aren’t paying attention to the charts and/or haven’t done your preparation correctly. By setting price alerts you can also improve your process easily.

2) You were scared to enter

This usually happens when traders don’t fully trust their method. They see a setup in front of them and then just let the opportunity pass – even worse, they may end up chasing price as price moves in their favor.

In my beginnings, when I struggled with this problem, I started collecting screenshots of those trades and after I saw that my analysis was often right, I gained trust and then had fewer and fewer of such missed trades.

3) There was no real entry given

This type of missed trades is what causes a lot of confusions and mistakes. When you analyze your missed trades, you have to make sure to very objectively and accurately evaluate whether there was a reasonable entry given or not. Especially, you have to avoid falling victim to recency bias where you change your approach based on a recent example where you missed a trade. 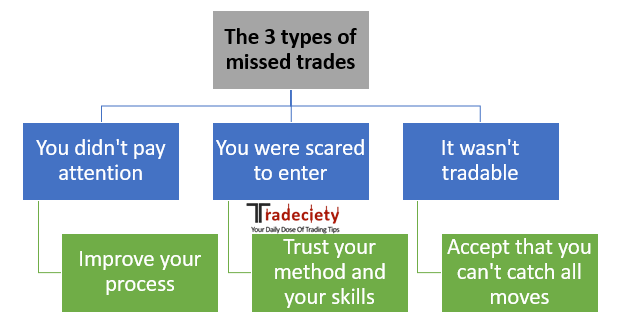 What to do with my trades when I sleep?

That’s a question that has come up recently in our new trading group as some newer traders experienced fear and weren’t sure how to handle their overnight exposure. Here was my answer:

If you are holding a trade overnight, move your stop to a closer spot to protect your downside. If you feel very uncomfortable, take partial profits. Over time, you’ll see that not all trades will reverse on you when you sleep; some will take you out and some will keep going. It will average out over time and by moving your stop loss, you can protect your downside while letting price decide if your initial analysis was correct.

I recently came across an interesting study1. Researchers had 2 groups of traders: the first were regular traders and the second were traders who received a 3 hours lecture about risk management and position sizing. Then, all traders were given the exact same entries and the only thing that they could vary was the risk and position size. The results were surprising:

This study shows nicely that performance has much more to do with risk management than it has with entries. The psychology behind why traders take too much risk: catching up after losses, feeling over-confident or having unrealistic expectations, plays a large role here as well.

Rules are good, but you need context

I am a big believer in having trading rules and planning your trades in advance. However, you still have to put current price into the overall context. You might get a signal based on your strategy’s rules, but if the overall price structure and market context are not supporting your trade idea, you have to stay out.

That’s where so many fail: establishing and following your rules religiously while applying discretionary thinking to the price structure. Rules should be seen as filters that keep you of trades and they shouldn’t be confused with automatic entry triggers.

It’s ok to have an opinion about a chart or a trend, but you have to be clear that opinions have nothing to do with how you pick your trades.

Never allow yourself to enter a trade based on an opinion alone. Always verify that you are still acting within the scope of your trading method. The biggest mistake traders make is that they want to be in a trade all the time. However, a trade should ONLY be taken if it is based on trading rules.

Taking trades based on guessing or gut-feel has to be avoided and it gives you inconsistent results – gut feel is not a reason to enter a trade. You’ll be always able to reason yourself into a trade – only trade when your system tells you to.

The art of not caring about your trades

If you want to become a professional trader, you’ll take thousands of trades over the years. Don’t let a single trade have a huge impact on your emotions or your account. This is very tricky, because you have to make sure that you execute your individual trades as optimal as possible, while not caring too much about the individual outcome. Understand that how hard you try, you’ll lose trades all the time.

The only thing you can control about a trade is your approach and the way you execute it. The outcome is totally out of your control. You can’t force a winner and it’s not your job as a trader either. Let probabilities play out and trust your edge.