The most important Forex news 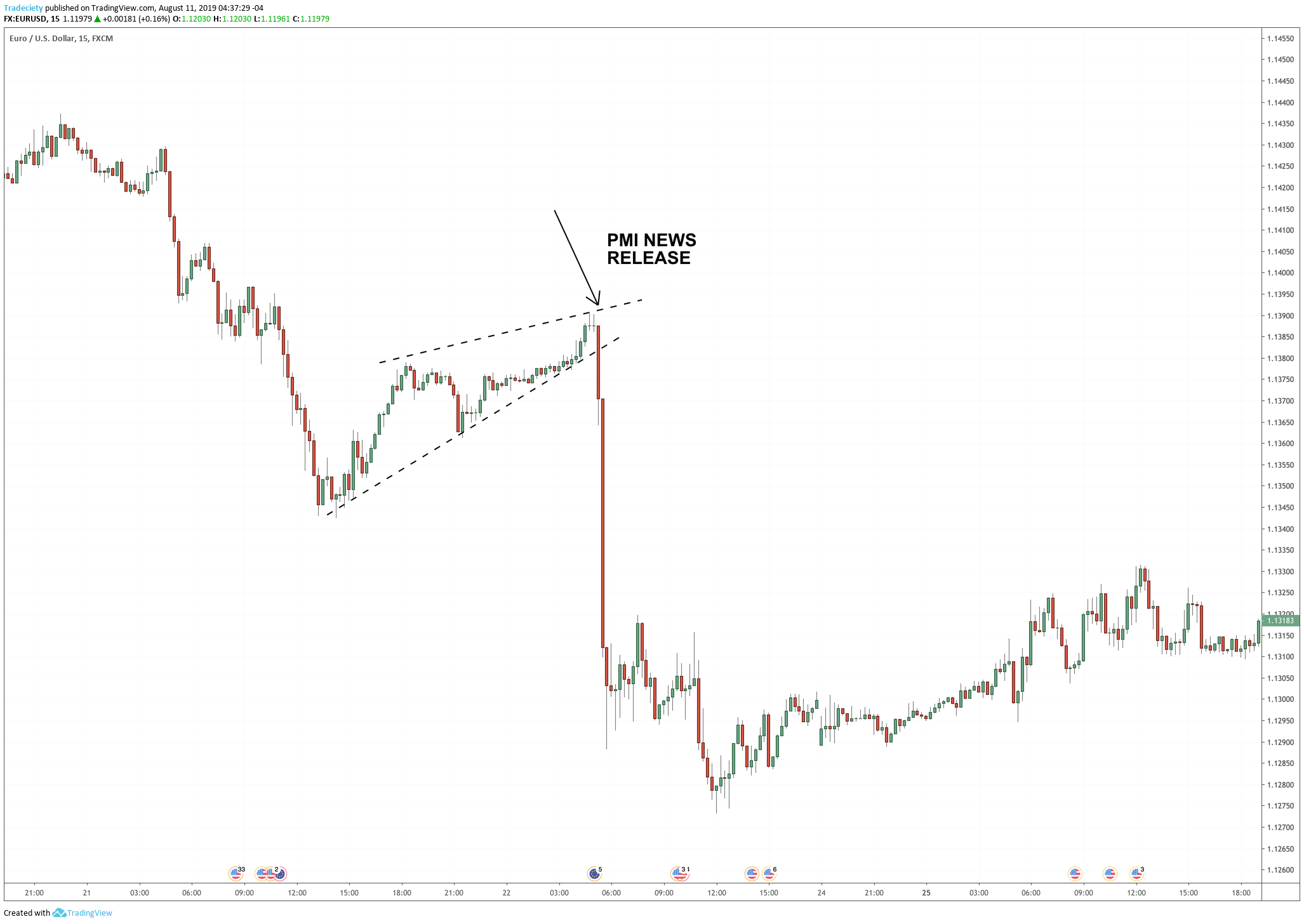 News trading has been becoming increasingly popular among Forex traders because it offers opportunities to make large profits within a relatively short period of time. However, just like not all fingers are not the same, not all macroeconomic news events have a similar impact on the market. For example, the German Flash Manufacturing PMI will always have more impact on the Euro compared to the French Flash Manufacturing PMI.

If you have opened an economic calendar, you can already see which news higher impact on the market and others that you can easily ignore. For example, if you are trading the Australian Dollar, you can easily ignore the Conference Board’s month-over-month Leading Index reading, as it will hardly move the price of AUD/USD or AUD/CAD, and even if it does, the movement will probably not change the prevailing trend.

Compared to low impact news like the CB Leading Index, the unemployment rate of Australia or the overnight cash rate set by the Reserve Bank of Australia (RBA) will have a severe consequence on the rate of AUD/USD or any other currency pair involving the Australian Dollar.

So, out of the hundreds of news releases, how do you know which news events you should keep an eye on? The good news is, just like the Pareto principle, only a handful of news releases are responsible for the bulk of the price movement for most currency pairs. Some of these news events are common for almost all currencies and if you can just understand how these affect your favorite currency pair, then you will be far ahead as a trader than most novice traders who are only looking at a chart.

One of the key responsibilities of the central banks around the world is to maintain a low unemployment rate. All of the major monetary policy decisions taken by any central bank is to keep it near the Non-Accelerating Inflation Rate of Unemployment or NAIRU.

Figure 1: Unemployment Rate of the United Kingdom and the European Union

Currently, the unemployment rate of the EU is much higher than in the UK. Hence, a simple analysis would indicate that the valuation of the Euro would be higher than the British Pound (EUR/GBP).

If you see a consensus forecast saying the unemployment rate of the European Union would go down next month, but it would remain unchanged in the United Kingdom, you can consider it as bullish news for the EUR/GBP.

The Gross Domestic Product (GDP) is like the scorecard for a game. It measures the overall health of an economy and the higher the GDP growth rate, the stronger the currency would be. If you are trading the GBP/USD, just by keeping an eye on the GDP growth of the US and the UK, you can easily figure out which way the pair would move in the coming weeks.

Figure 2: GDP Growth Rate of the United States and the United Kingdom 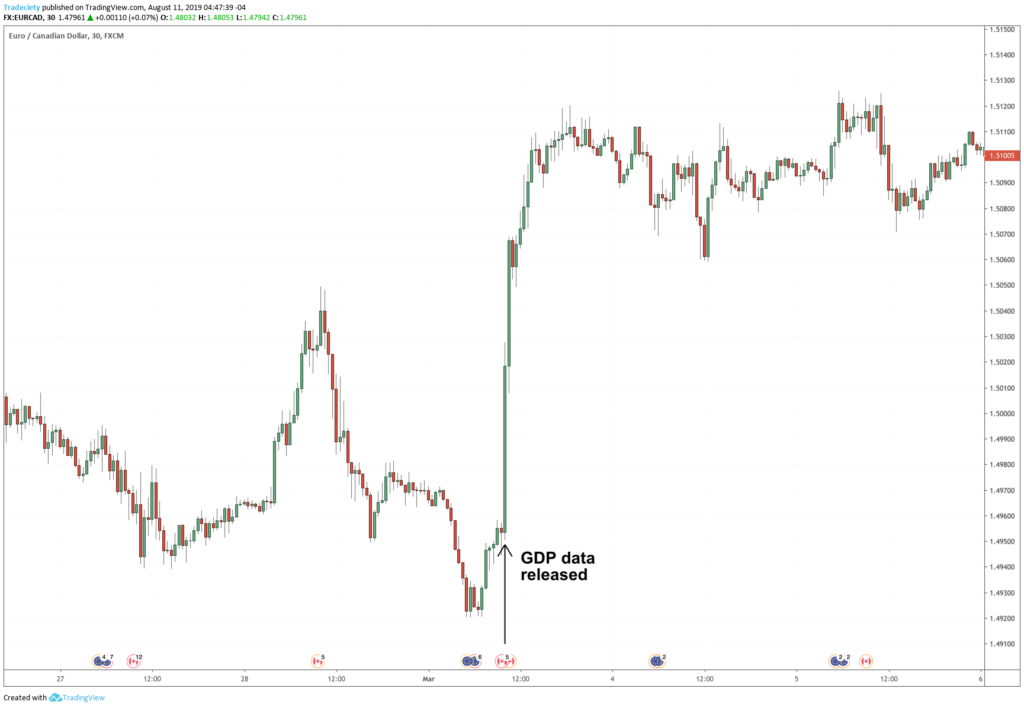 The Consumer Price Index (CPI) measures the inflation rate in the economy compared to a base year. You do not need to be an economist to understand how inflation affects a given set of currency pair, but some basic understanding would help you go the extra mile. You see, most central banks have a monetary policy that tries to limit inflation rate to a certain predefined range. When inflation goes above this range, central banks usually increase the interest rate to curb down inflation.

Most central banks try to limit inflation rate to 2.0% and use the CPI to measure it. However, the Federal Reserve, the central bank of the USA, uses the Personal Consumption Expenditure index instead of CPI. So, if you are trading the U.S. Dollar and want to anticipate the future interest rate landscape, use the PCE index.

Nevertheless, anytime you see a forecast of growing CPI, it would be bullish news for the currency. For example, if the forecast for CPI of UK is 2.5% for a quarter, and the CPI of Australia remains at 1.5%, then it will have a bullish effect on the GBP/AUD.

You see, banks also borrow money from each other, but they do it on an overnight basis. Central banks try to influence the overnight rate by lending in the money market at their own overnight rate and it is an important tool in their monetary policy arsenal.

Overnight interest rate is the key reason prices fluctuate in the market as it also affects the swap rate. In fact, many traders think that the main purpose of fundamental analysis is to predict future interest rates of major central banks.

While understanding monetary policy is difficult, even for veteran economists, the way to interpret this news is rather easy. If you see a forecast that says the Federal Reserve will likely increase the overnight rate, it will likely have a bullish effect on the U.S. Dollar. So, for example, if the Japanese Central Bank keeps its rate unchanged, it will be a piece of bullish news for the USD/JPY.

The nonfarm payrolls figure measures the number of additional jobs added from the previous month in the corporate sector in America, which is an important leading indicator of the overall employment situation in the country. 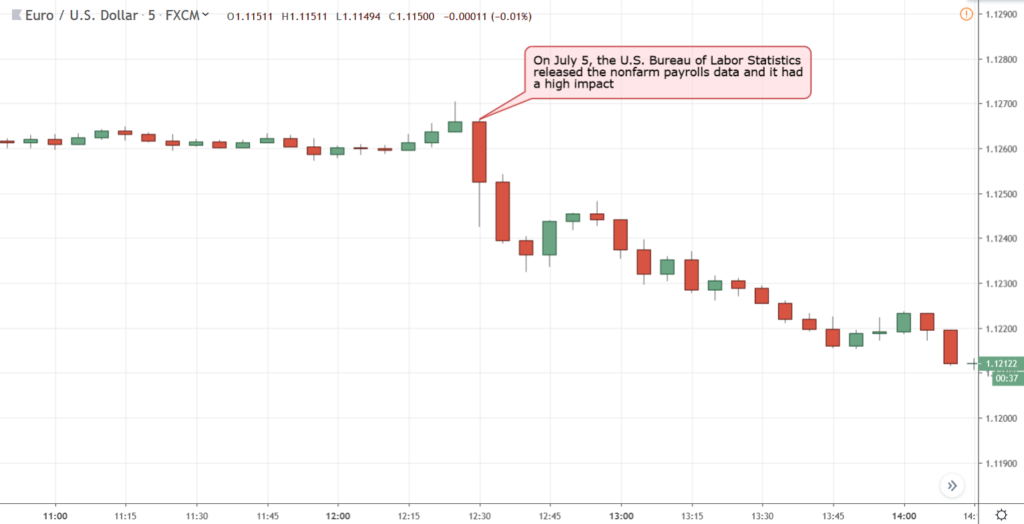 Figure 4: Impact of the Nonfarm Payrolls Data on the EUR/USD

The U.S. Dollar is the de facto reserve currency in the world and the nonfarm payrolls data is usually released on the first Friday of each month by the U.S. Bureau of Labor Statistics (BLS). While there is not an equivalent data release in every economy, you should definitely keep an eye on the U.S. NFP as it will eventually have major impacts on almost all currency pairs involving the U.S. Dollar.

If you see the forecast of the NFP is higher compared to last month, it is bullish news for the U.S. Dollar. So, for example, it will be the bullish impact on the USD/JPY and a bearish effect on the EUR/USD.

OPEC is basically a cartel on an international level. OPEC countries consist of 15 or so major crude oil-producing nations like Saudi Arabia, Kuwait, Iran, etc.

Currently, OPEC countries control around 44 percent of the world’s crude oil output and their decision to increase or decrease crude oil production can have a major impact on the world’s energy market. There is a strong correlation between the currency market and oil price because of how resources are distributed. Hence, it can affect the balance of trade (BOT) of a currency, and influence market psychology.

Due to this influence over oil prices, OPEC’s decisions can move the currency market because it impacts production on a global scale and as Forex traders, you need to keep an eye on what OPEC is doing.

You see, Crude oil is quoted in U.S. dollars because it is the de facto reserve currency. Hence, any national currency of a country that has a large crude oil reserve will be impacted by the crude oil price.

Furthermore, low energy price means more disposable income will be left to consumers and it can create demand for goods and services, boosting sales. Hence, when OPEC increases production, it tends to increase GDP growth in the U.S., which has a large oil reserve. But it may not have a significant impact on the Japanese Yen because Japan does not have large oil reserves. In this scenario, the USD/JPY would go up because cutting oil production will be bullish news for the U.S. Dollar.

While it is difficult to analyze what would be the impact of oil price on a given currency, knowing and understanding the impact by reading detailed analysis can help you sense the pulse of the market and make better trading decisions.

Retail sales reports are usually issued on a monthly basis and market analysts consider it as a leading macroeconomic indicator. When consumers feel safe and secure about their jobs, they tend to spend more on durable and non-durable goods, which boosts transactions and creates value. In terms, retail sales can be a pretty good indicator of future the GDP growth rate.

The GDP, as we discussed earlier, is the ultimate indicator of a currency’s strength. How retail sales are influencing it can give you an edge in the market because you can predict GDP growth well before the quarterly reports!

In the end, the rule of thumb is, if retail sales go up of one country and it is the base currency of the pair, but it remains stagnant in another which is the quote currency, it will be a piece of bullish news for the base currency.

The Purchasing Managers Index (PMI) is based on survey results of key purchasing managers in the economy. The survey asks managers to rate what is their perspective about the business over a 6-month period if they plan to hire new workers or reduce the size of the workforce, and things like the inventory level to fill new orders.

The way to interpret the PMI is keeping an eye on if the number is above or below 50. If it is below 50, it indicates there might be a recession coming and if it is over 50, then the economy is expected to expand.

During the normal growth period, the PMI usually hovers near 55 to 60, but the trick is to see if there is a trend. If you see PMI consecutively going up over the last few months, consider it to be bullish news for the associated currency. For example, if the PMI of the UK went from 52 to 55 over the last few months, but the PMI of the US only went up from 52 to 53, it would be bullish for the EUR/USD. 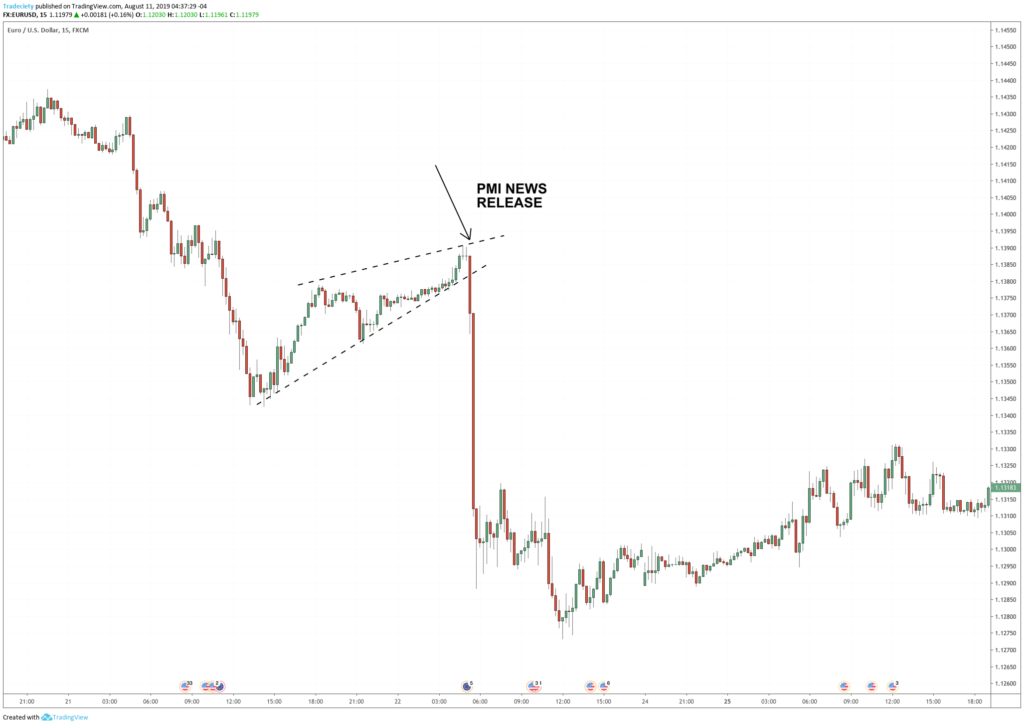 According to the National Association of Home Builders in the US, the housing sector makes up around 15 to 18% of the economy. While the portion of the economy a country’s housing sector contributes to may vary, it is usually pretty high. Hence, as a Forex trader, you should keep an eye on vital statistics about a country’s housing market when you are trading that currency.

Just think for a second, when would you buy a house or start a major remodeling of your kitchen? The answer is when you have ample savings or expectation of stable income, right? So collectively, when the prices of houses go up or sales of housing units go up, it is common sense to interpret it as a sign of strength in the economy. Also, new housing projects employ a large portion of the workforce that can reduce unemployment and prompt central banks to increase the interest rate.

As a result, when you see positive housing data, consider it to be major bullish news for the currency. For example, if you see Housing Starts, that counts the number of new housing units being built, going down, it can signal a slowdown in the economy and traders will interpret it as bearish news for the U.S. Dollar. Hence, if you are trading USD/JPY, you should look for trading opportunities to short the pair.

There are many other economic indicators that you should understand and incorporate into your fundamental analysis, such as the Purchasing Managers’ Index (PMI), Housing Starts, Capacity Utilization Rate, and so on. However, if you are just starting out and wants to feel the pulse of the market, the 5 economic news releases we discussed should act as a good starting point.