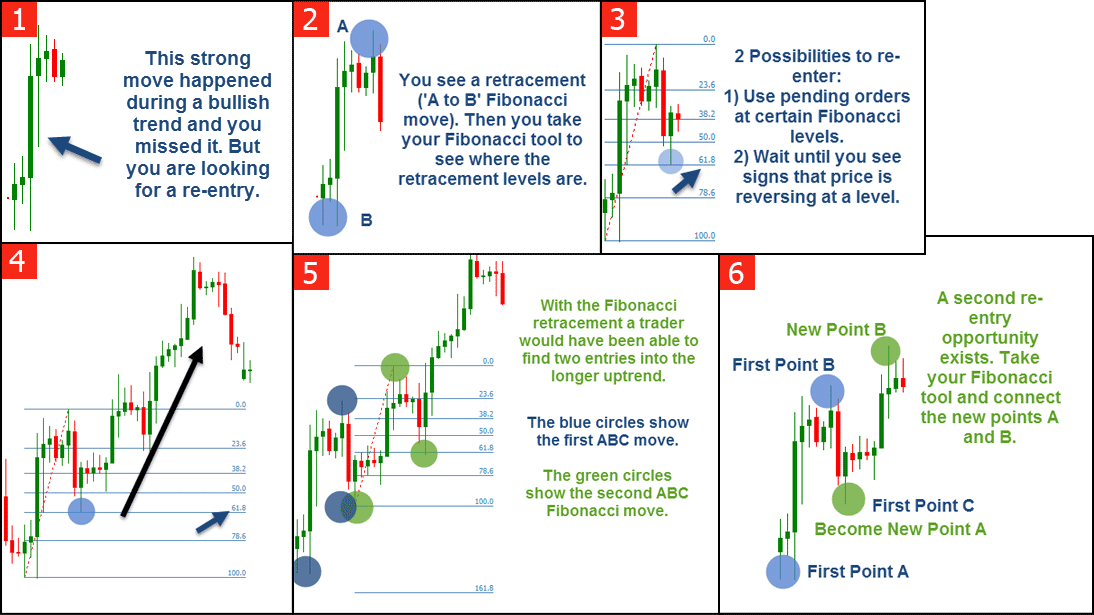 The Fibonacci tool is very popular amongst traders and for good reasons. The Fibonacci is a universal trading concept that can be applied to all timeframes and markets. There are also countless Fibonacci tools from spirals, retracements, Fib time zones, Fib speed resistance to extension.

In this article, I will explain how to correctly draw a Fibonacci sequence and how to use the Fibonacci extensions for your trading.

How to draw Fibonaccis – just do it

Often, traders who have no prior experience with Fibonaccis are worried that they are ‘doing it wrong’ and they then don’t use the Fibonacci tool at all. I can assure you, there is no right or wrong when it comes to drawing Fibonacci and you will also see that different traders use Fibonacci in slightly different ways.

The Fibonacci levels are %-based which means that even when you draw them differently, they will often line up correctly.

A = the origin of a new price or trend move. These are usually swing highs and lows, or tops and bottoms.

B = Where the trend move pauses and reverses to make a retracement.

The following 4 screenshots show typical A to B moves

Now let’s apply the Fibonacci retracement tool to the A to B moves. For that, we pick the Fibonacci tool from your platform, select point ‘A’, drag it to ‘B’ and release it.

Connecting A to B moves with the Fibonacci retracement tool

After you have identified an A to B move and plotted your Fibonacci tool on your charts, you should be able to find point C.

C = the point where the retracement ends and price reverses into the original direction.

As you can see, the first 3 screenshots show the typical ABC move of a Fibonacci retracement. Point C is very obvious on all three charts and price bounced off the Fibonacci levels accurately.

How to trade with Fibonacci

The most common use for Fibonacci levels is the regular retracement strategy. After identifying the ‘A to B’ move, you pay attention to the retracement level C. 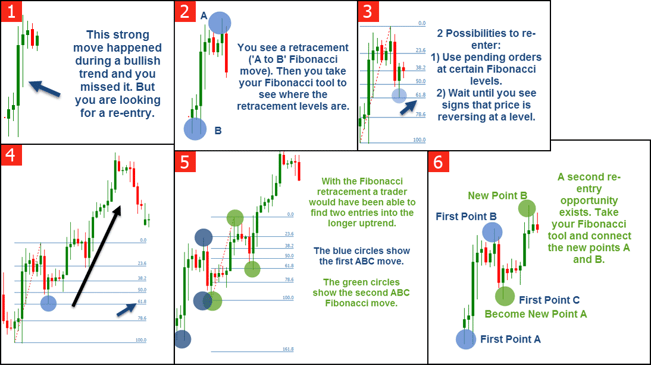 Another possibility to use Fibonaccis is to find an AB-Fibonacci move on a higher timeframe and then go down to your regular timeframe and watch the retracement levels as support and resistance guidelines.

Most trading platforms allow you to add custom levels. Usually, the parameters to add the Fibonacci extensions are:

The rules for take profit orders are very individual, but most traders use it as follows:

In my strategy, I use the Fibonacci extensions to find trends that have completed an ABCD pattern and are likely to reverse. The Fib extension can be of great help here.

The article demonstrated how to use Fibonaccis efficiently in your trading. However, don’t make the mistake of idealizing FIbonaccis and believing that they are superior over other tools and methods. Nevertheless, Fibonacci is a great tool to have and can be used very effectively as another confirmation method. Whether you are a trend following or a support and resistance trader, or just looking for ideas how to place your take profit orders, Fibonaccis are a great addition to your arsenal.